The Lore Of The Rugs 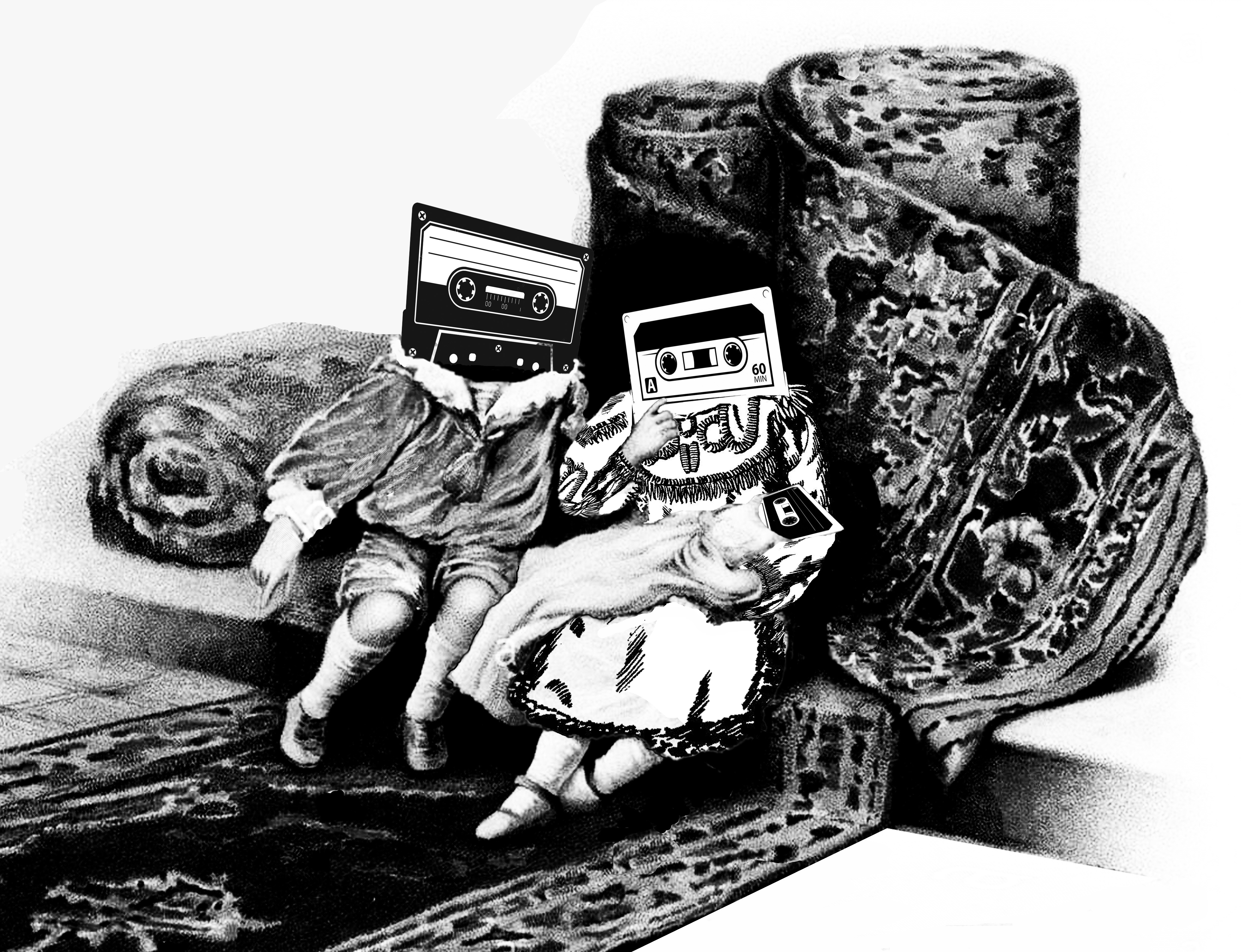 The Lore Of The Rugs

The Lore Of The Rugs
... celebrating 40 Years of Taped Rugs Productions

The first official Taped Rugs Production was released to the public on cassette tapes in 1980.  Since that time, Taped Rugs has unleashed over 300 official products to the public.  While its unique, independent-minded video, literature, and other art forms have coaxed reactions from thousands of observers over the years, Taped Rugs is today best known for its audio productions.

Taped Rugs audio has, from its very beginnings, been a vast variety show.  Genres of all sorts, blends of all sorts of genres, and a large assortment of anti-genres make up the content of the Taped Rugs audio catalog — around 1500 individual recordings.  As any observer might expect, the "quality" of these recordings has evolved as technology itself has evolved over the last 40 years.

Here, on "The Lore Of The Rugs," Charles Goff III commemorates Taped Rugs' 40th Anniversary by offering up modern interpretations of several of his very old audio compositions, some of which actually predate Taped Rugs' inaugural release.

This album is dedicated to all the people who have shared in molding Taped Rugs Productions over the last 40 years and more.  This includes everyone who has donated musical instruments, recording equipment, raw materials, funds, personal time, critical evaluations, moral support, etc.  It includes reviewers, interviewers, DJs, and promoters.  It includes operators of cassette labels, CD labels, online labels, and, very importantly, everyone responsible for keeping ARCHIVE.ORG. functioning on the internet. Most of all, it includes the many artists who have contributed their talents to the bands and musical projects which have made Taped Rugs the unique thing it is.  Many thanks to one and all!

The Following Tools Were Used In The Creation Of This Collection:

All performances, mixings, and production by Charles Rice Goff III, except where noted.

1)  The musical structure of "Tufted Rugs" is based on a song that Goff wrote in 1976, called "Your Christmas Carol."  Rare recordings of the original exist but have never been released to the public.  The lyrics of "Tufted Rugs" are all new.

2)  "Aspect For Red Finger Canons" is a one-two punch that segues together a couple of old Goff compositions.  The first portion of the recording reinterprets "Canons For You," which Goff wrote and recorded in 1979.  The recording is archived online here:
https://archive.org/download/TapeRecordingExperimentsSeventies/02CanonsForYou.mp3

The second portion of the song reinterprets "Red Finger Aspect," which Goff concocted  between 1982 and 1983.  The piece was first released to the public in 1987 as the coda to a Disism composition, called "Space 101/Red Finger Aspect."  The screams that appear in "Aspect For Red Finger Canons" were lifted from the original Disism piece.  A recording of this Disism classic is archived online here:
https://archive.org/download/UnearthDisism/06RedFingerAspectSpace101.mp3
3)  "Suck On My Nose" was written by Goff and Gordon Lyon in 1978.  The oldest recorded interpretation was performed live by the group:  Temporarily KY, and is archived online here:
https://archive.org/download/TemporarilyKY/04SuckOnMyNose.mp3

In 1998, Goff recorded a solo version of the song on 4-Track cassette tape, available here:
https://archive.org/download/Raritease/03SuckOnMyNose.mp3
4)  Goff composed "Ugly Sickness" in 1992, while he was suffering from laryngitis. The original recording appeared on Goff's "33 And A Third" cassette album, and is archived online here:
https://archive.org/download/ThirtyThreeAndAThird/10UglySickness.mp3

The re-interpretation presented here on "The Lore Of The Rugs" incorporates the original (very hoarse) vocal track that Goff used for the 1992 recording.  The blues guitar for the re-interpretation was performed and recorded in 2020 by Eric Matchett, of the Taped Rugs group: Turkey Makes Me Sleepy.

The newly-interpreted "Ugly Sickness" was first released to the public on the 2020 Harsh Reality collection entitled:  "High Risk of Rainbows & Hair Ribbons (I Got the Corona Virus - 19 Blues)" and was cryptically credited to the band:  "Bird Flu Over The Cuckoo's Nest."  The recording is archived at the link below:
https://harshrealitymusic.bandcamp.com/track/bird-flu-over-the-cuckoos-nest-ugly-sickness-usa

5)  "No Space Is Complete Without A Rug" is made up of a couple of elements that Goff rejected when editing together the songs of "The Lore Of The Rugs."  It is included as a short pause/intermission in the program, as well as a little reminder of how experimental sound collage and improvisation have dominated the Taped Rugs catalog of recordings for the last 40 years.

6)  "Helter, Chuck, And Dave" incorporates elements from the Beatles song: "Helter Skelter," the Beatles song: "When I'm Sixty-Four," and the Genesis song: "The Carpet Crawlers."  One of Goff's first "multi-tracked" recordings was a lo fi cover version of "When I'm Sixty Four."  This 1973 production is archived online here:
https://archive.org/download/Tapes1970s1980sTreasuresForDeepDivers/10WhenIm64.mp3

Since 1980, Taped Rugs has produced a number of unique interpretations of other artist's music.  "Helter, Chuck, And Dave" revisits "When I'm Sixty-Four" by adapting its lyrics to "Helter Skelter."  The coda of "Carpet Crawlers" serves as one of many references to rugs that appear throughout "The Lore Of The Rugs."
7)  The musical structure of "Isn't She Good?" is based on a song that Goff wrote around 1978-1979, called "Dream Girl."  The music and original lyrics were the first example of audio art that spawned within Goff's dreams.  Since 1979, over 100 other Taped Rugs compositions have similarly sprouted in the fertile soil of Goff's subconscious mind.  Rare recordings of "Dream Girl" exist but have never been released to the public.

The year, 2020, not only marks the 40th Anniversary of Taped Rugs Productions, but it also marks the 25th Anniversary of the first kiss shared by Goff and his wife, Karen. The lyrics of "Isn't She Good?" are all new and celebrate the couple's 25 years together.

8)  Goff pieced together the original "Asbestos I Can" between 1982 and 1983.  The piece was first released to the public with additional music written by Killr "Mark" Kaswan of Disism in 1987 and made its public debut on the cassette compilation: “Insane Music For Insane People, Volume 22,” released by Insane Music of Belgium in 1987.  The Disism piece is embellished with a collage of sound samples, and some of those original samples are included in the re-interpreted version presented on "The Lore Of The Rugs."  The Disism recording is archived online here:
https://archive.org/download/UnearthDisism/05AsbestosICan.mp3
Detailed documentation of the history and creation of the following recordings was published at the online Electronic Cottage Website and can be accessed both in the RTF files included in this post and via the following internet links:

Uploaded by Taped Rugs Productions on May 18, 2020